Cast iron waste pipes have been in use for over a hundred years. The average lifespan of cast iron waste pipes is about 50 to 75 years, depending on the quality of manufacturing. Standards for cast iron pipe have been around since the 1800’s, but they have been voluntary standards. Over the years, some companies competing for business have chosen to make an inferior product to cut costs. And so, we have a wide range of life expectancy.

To understand how cast iron waste pipes fail it is important to understand how they were made. The old method of casting pipe, called the “pit-cast” method, can leave variations in the thickness of the pipe walls. Waste running through the lines causes hydrogen sulfide gas to form. This can oxidize and produce sulfuric acid, which corrodes cast iron from the inside out. As the sulfuric acid eats away at the pipe these thinner areas become compromised first. Some drain cleaners also contain sulfuric acid and, if used continuously, can accelerate the corrosive action and further shorten the life of the cast iron pipes. 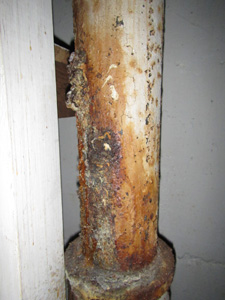 When examining cast iron waste pipes, you’ll typically find two different signs of failure. One is cracking that usually forms on top of the pipe or at a seam, created by the form used during the casting process. The other external indication of failure is blobs of rust, usually found on the underside of horizontal sections, but can appear on horizontal sections of pipe as well. The size of these blobs can range from little pimples, to the size of a walnut. These aren’t as obvious as cracks and can be overlooked because they don’t leak continuously. As the iron around a pinhole rusts, the iron expands and seals the leak. While they might not be actively leaking when discovered, it’s certainly a sign that internal corrosion has breached the wall of the pipe. When these signs of failure are found your cast iron waste pipes have neared the end of their serviceable life.

Things You Should Know